This extraordinary vertical forest is being constructed in Milan as part of two residential towers.

The towers house of 730 trees, 5,000 shrubs and 10,000 plants. These drawings of the building were produced by Stefano Boeri, Gianandrea Barreca, and Giovanni La Varra, the architects who designed the project for the firm Boeri Studio.

The architects state that in addition to being pleasant to behold, the two towers will help purify the city air, increase bio-diversity and protect residents from the sun and noise pollution. By bringing the plants into the city, they also aim to reduce the effects of ‘urban sprawl’. For wildlife, especially birds and insects a haven in the middle of one of Italy’s largest cities will be of enormous benefit. 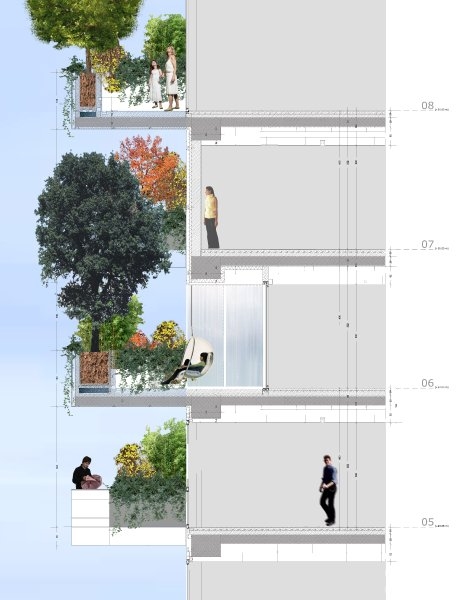 Tree-planting recently began on the structures, but not before the architects spent some two years working with botanists to determine which varieties and sizes would best suit their purpose. Once the project is finished later this year, they will be watered mainly with grey water produced by residents, and tree care will be managed by building staff at the towers.

With so many plants to water, the design of the irrigation system must have been right at the heart of the project. Although we do not know the details, drip watering systems will have inevitably been used to bring water to the root zones of each plant.

The irrigation system has been designed to use grey water from the showers and sinks in the building. This will have then been stored and filtered before being pumped into the irrigation system. One of the challenges of using grey water is the soap content, as this will clog conventional drip nozzles if the levels are too high. Companies such as Netafim have pioneered drip lines able to cope with grey-water systems, as well as filtration systems.

We use cookies on our website to give you the most relevant experience by remembering your preferences and repeat visits. By clicking “Accept All”, you consent to the use of ALL the cookies. However, you may visit "Cookie Settings" to provide a controlled consent.
Cookie SettingsAccept All
Manage consent

This website uses cookies to improve your experience while you navigate through the website. Out of these, the cookies that are categorized as necessary are stored on your browser as they are essential for the working of basic functionalities of the website. We also use third-party cookies that help us analyze and understand how you use this website. These cookies will be stored in your browser only with your consent. You also have the option to opt-out of these cookies. But opting out of some of these cookies may affect your browsing experience.
Necessary Always Enabled
Necessary cookies are absolutely essential for the website to function properly. These cookies ensure basic functionalities and security features of the website, anonymously.
Functional
Functional cookies help to perform certain functionalities like sharing the content of the website on social media platforms, collect feedbacks, and other third-party features.
Performance
Performance cookies are used to understand and analyze the key performance indexes of the website which helps in delivering a better user experience for the visitors.
Analytics
Analytical cookies are used to understand how visitors interact with the website. These cookies help provide information on metrics the number of visitors, bounce rate, traffic source, etc.
Advertisement
Advertisement cookies are used to provide visitors with relevant ads and marketing campaigns. These cookies track visitors across websites and collect information to provide customized ads.
Others
Other uncategorized cookies are those that are being analyzed and have not been classified into a category as yet.
SAVE & ACCEPT